“Everybody dies”, she whispered as the tense action film began.

I’ll never forget that awful spoiler alert, issued many moons ago. Yet, because the warning was inaccurate (and ridiculously annoying), it has become my standard movie intro, along with the advice, “Don’t get too attached”. Seriously though, is a sad story even worth the time?

If the story is “to be continued” and there’s hope for a better ending, absolutely! Jesus thought so too. He’s the One who spoke the words of our key verse: “And if you do not carry your own cross and follow me, you cannot be my disciple. But don’t begin until you count the cost.” (Luke 14:27-28a) From a human perspective, nothing about His ending was good – betrayal, abandonment, arrest, torture, suffocating on a cross for hours. But Jesus knew this before leaving heaven. He came anyway. 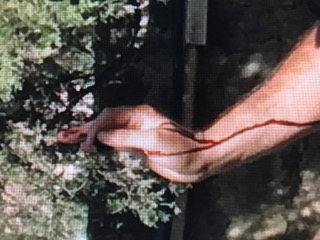 Not only did Jesus suffer a torturous death, He lived a difficult life. Imagine going from heaven’s glory to earthly stable stench. Jesus grew up poor, in a bad area (“Can anything good come out of Nazareth?”), probably receiving stares, glares and slander due to his mom’s reputation (the pregnancy, losing Him for days – people talk!) and definitely for His ministry and miracles, not to mention the constant travel, exhaustion and so-called “followers” more interested in personal gain than friendship. Jesus saw each sacrifice in advance yet still chose to live and die for us. He gave His blood, sweat and tears not only in Gethsemane but before and after as well. Counting the cost, Jesus deemed mankind (flaws and all) worth every bit of it. He was able to endure to the horrific end because He knew His journey was the gateway to so much more. His focus was eternal – He wanted us with Him forever!

I can’t help but compare Jesus to two Old Testament men: Uriah, of David and Bathsheba (2 Samuel 11), was a mighty soldier to the king, fiercely loyal above all else. He even put mission before pleasure by remaining on duty when given a day off. Uriah didn’t know of his friend’s deception and murder plot (like Jesus did), but he did know that death was a real possibility in war. He knew what he believed in and stood for – he counted the cost and fought; Esau, on the other hand, oldest son of Isaac and Rebekah, twin of Jacob (Genesis 25), lived for the moment – forfeited his future without thought – and gave up his birthright to feed his flesh. That’s the exact opposite of counting the cost. According to Malachi 1:4, Esau’s descendants (the Edomites) will be called “The People with Whom the LORD is Forever Angry.” Yikes! In the words of David Guzik, “It costs something to be the disciple of Jesus; it costs more to reject Him.”

Since man’s debacle in Eden, this world has dealt with disease and disaster. Everyone suffers while evil runs rampant on Satan’s playground. And God hurts with us. But, as the Bible states, “…it is better, if it is the will of God, to suffer for doing good than for doing evil.” (1 Peter 3:17). Did you know followers aren’t necessarily disciples, nor are disciples always followers? Just look at the multitudes who followed Christ but took off when His teachings became too difficult. A disciple is a “learner”. But knowledge without practice helps no one, not even the student. Let us be both disciples and followers of Christ!

Can I share a piece of my heart with you? My husband and son have each traveled overseas for missions, bordering areas where believers get beheaded. Between travel mercies, malaria and ISIS, my prayer was always, “Keep him safe”. But in counting the cost, God changed my focus to three little words that trump safety, “Spread My Word.” In my family, we know the end of our story will be amazing, no matter how we go out but too many others still need to hear the Hope. They were worth it to Christ; He is worth it to us. It’s why, even faced with fear, I’m able to support and encourage these callings.

Do you want life with Jesus or just Jesus once you die? Is following Him worth your blood, sweat and tears? Because (here’s a spoiler alert you won’t want to miss) love without action is worthless, like a sad movie with no sequel. The Lord deserves priority in our hearts, minds, mouths, hands and feet, across the world and in our own backyards. The journey won’t be easy and shouldn’t be taken lightly. May we count the cost with grateful hearts while looking toward everlasting tomorrows together.